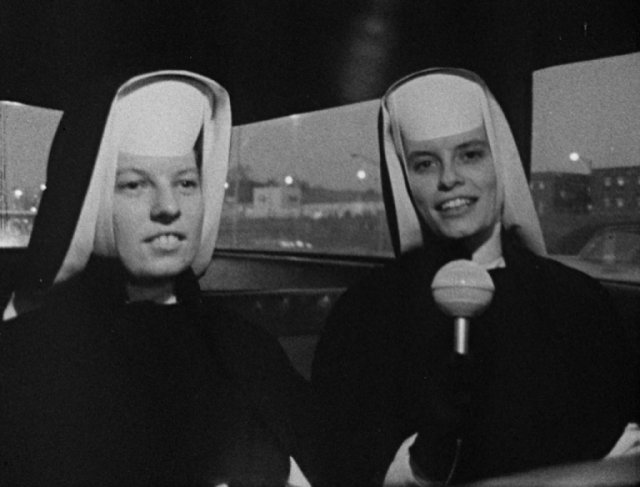 One of the earliest examples of Kartemquin co-founders Gordon Quinn and Gerald Temaner’s exploration into the world of cinéma vérité, Inquiring Nuns captures the attitudes, fears, and dreams of everyday Chicagoans, giving audiences and researchers insight into the political and social climate of 1960’s Chicago. The film’s music is composed by Philip Glass in his first credited film score.

Two young Catholic nuns crisscross Chicago, from a supermarket to the Art Institute to church on Sunday, in order to ask random strangers the question, "Are you happy?"

"I could be happier."

"Mostly, except about Vietnam."

"Yeah, because I went to communion this morning."

They meet a lonely girl, a happy mother, young lovers, hippie musicians, a sociologist, and even the actor Lincoln Perry, better known as Stepin Fetchit. The interviewees are sometimes taken aback, nervous, or clamoring to get into view of the camera. The humor and pathos of these encounters elevates the film into a serious and moving inquiry of contemporary society and the manner which people examine their own lives.

Inquiring Nuns is the second film by Kartemquin Films, the legendary Chicago production collective begun in 1966 that has now produced over 65 documentaries such as Hoop Dreams and The Trials of Muhammad Ali, and 2018 hits Minding the Gap and America to Me.

Operating from a manifesto of “Cinematic Social Inquiry” and inspired by Jean Rouch’s Chronicle of a Summer (1961), the film was shot in 1967 and premiered at the 1968 Chicago International Film Festival, where it was reviewed by a young Roger Ebert. Funded by InterMedia, a Catholic arts-supporting organization that was interested in using cinéma vérité to foster democratic virtues, the project was not intended for a commercial market. It was split into two 34 minute parts, which made it easier for the film to be taken to church basements and to other educational, discussion-based screenings.

The newly restored 16mm print was supported through a grant by the National Film Preservation Fund, combines the halves into a single film, which is the directors’ longstanding preference and matches its original festival showing. The preservation by ColorLab showcases the beauty of Quinn’s cinematography, shot on Kartemquin’s “Camera #1”, a custom-modified crystal sync Auricon with a used manual zoom lens Quinn purchased from Albert Maysles, and to which he added a World War II gunner handle bought from a pawn shop as an extra grip for steadiness